The number of loads posted on the DAT network of load boards dipped 1 percent, and truck posts gained 8 percent. 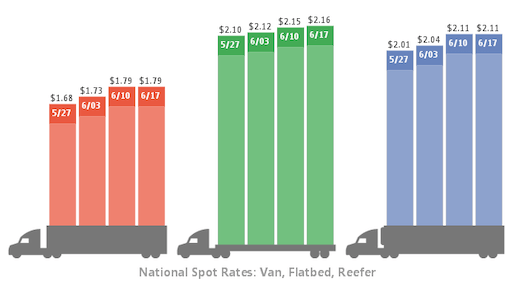 The number of loads posted on the DAT network of load boards dipped 1 percent, and truck posts gained 8 percent, as capacity returned to the spot market during the week ending June 17, according to DAT Solutions, which operates the industry’s largest electronic marketplace for spot truckload freight.

On-highway diesel prices continued to slide and fell another 3 cents to a national average of $2.49/gallon. Spot market rates include a fuel surcharge.

After adding 11 cents from May 27 to June 10, the national average van rate held steady at $1.79/mile. The number of posted van loads declined 1 percent, while truck posts increased 9 percent.

Rates are derived from DAT RateView, which provides real-time reports on prevailing spot market and contract rates, as well as historical rate and capacity trends. All reported rates include fuel surcharges. For the latest spot market load availability and rate information, visit dat.com/trendlines, and join the conversation on Twitter with @LoadBoards.

The Vietnam shrimp export market booms as competitors suffer from impacts of Covid-19, according to a report from Tridge.
Tridge
October 14, 2020
Follow Us