The number of reefer equipment posts declined 32 percent, indicating a reduced work schedule for truckers during the holidays. 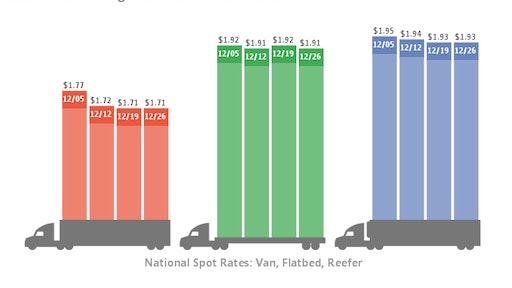 Refrigerated freight volume showed unexpected strength as the number of posted reefer loads dipped just 1 percent during the week ending Dec. 26, according to DAT Solutions, which operates the DAT network of load boards.

A 20 percent drop is more typical of a four-day work-week.

The number of reefer equipment posts declined 32 percent, indicating a reduced work schedule for truckers during the holidays. This produced a reefer load-to-truck ratio of 5.2, meaning there were 5.2 reefer loads for every truck posted on the DAT network, a 45 percent increase compared to the previous week. The national average reefer rate was unchanged at $1.93 per mile.

Van load posts fell 22 percent while posted van capacity declined 33 percent, pushing the van load-to-truck ratio up 17 percent to 1.9. The national average van rate was unchanged at $1.71 a mile despite a 1-cent reduction in the fuel surcharge.

Flatbed load posts fell 34 percent and posted capacity was off by 40 percent. While the national flatbed load-to-truck ratio rose 12 percent to 7.5, the average flatbed rate fell 1 cent due to a change in the fuel surcharge.

The price of diesel continued to slide, falling 4 cents more to a national average of $2.24 per gallon.