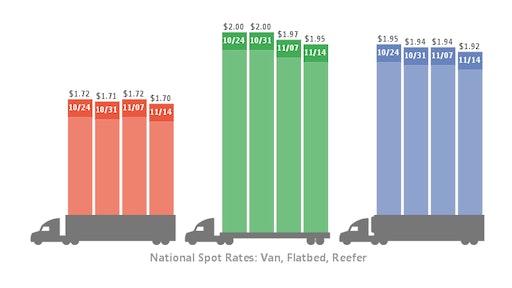 The number of available reefer loads increased 6.4 percent while truck capacity rose just 1.9 percent, which sent the load-to-truck ratio up 4.4 percent to 4.1 loads per truck.

The number of available trucks on the spot truckload market jumped 4.2 percent and the number of posted loads tumbled 4.1 percent during the week ending Nov. 14, according to DAT Solutions, which operates the DAT network of load boards.

The national average spot truckload van rate fell to $1.70 per mile and slipped in key markets including Los Angeles (down 2 cents to $1.99 per mile) and Memphis (down 6 cents to $1.97) despite higher volumes. Van load availability held steady (up 0.5 percent) and capacity increased 3.7 percent. The van load-to-truck ratio was unchanged from the previous week at 1.6 loads per truck, meaning there were 1.6 available van loads for every truck posted on the DAT network.

For refrigerated freight, the national average spot rate fell to $1.92 per mile, although outbound rates rose in major markets including Elizabeth, N.J. (up 10 cents to $1.76) and McAllen, Texas (up 2 cents to $1.68). The number of available reefer loads increased 6.4 percent while truck capacity rose just 1.9 percent, which sent the load-to-truck ratio up 4.4 percent to 4.1 loads per truck.

Flatbed load availability fell 16.7 percent against a gain of 8.9 percent in truck posts. The national flatbed load-to-truck ratio gave up 23.5 percent to 6.2 loads per truck and the national average spot flatbed rate dropped to $1.95 per mile.

The national average price of diesel fell 2 cents to $2.48 per gallon last week. All reported rates include fuel surcharges.