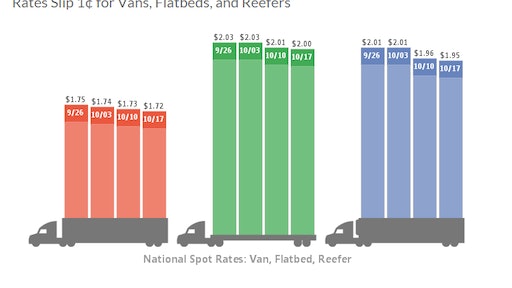 The number of posted loads on the spot truckload market fell 6.4 percent during the week ending Oct. 17, reports DAT Solutions, which operates the DAT network of load boards, continuing a pattern of softer demand.

The national average truckload van spot market rate dipped to $1.71 per mile. Average outbound rates were up slightly in Philadelphia and Buffalo but prices trended downward elsewhere: Los Angeles ($1.96 per mile, down 3 cents), Columbus, Ohio ($1.87, off 5 cents), and Atlanta ($1.73, down 4 cents) were among markets showing losses for the week.

Van load availability was down 9.3 percent while truck posts held steady (up 0.6 percent). The result was a 9.8 percent decline in the average van load-to-truck ratio, falling from 1.6 to 1.4 loads per truck, meaning there were 1.4 available van loads for every truck posted on the DAT network.

The national average reefer rate was down 1 cent for a national average of $1.96 per mile as demand continues to decline. Reefer load availability fell 7.3 percent while truck capacity remained unchanged (down 0.2 percent). That led to a reefer load-to-truck ratio of 3.7, a 7.2 percent decline from the previous week.

Flatbed load availability dropped 4 percent and truck posts were down 1.6 percent, resulting in a 2.4 percent decline in the load-to-truck ratio as a national average. The ratio dropped from 10.6 to 10.3 loads per truck. The national average flatbed rate was 1 cent lower at $2.00 per mile.

The national average price of diesel fell 3 cents to $2.53 per gallon last week. All reported rates include fuel surcharges.

Rates are derived from DAT RateView, which provides real-time reports on prevailing spot market and contract rates, as well as historical rate and capacity trends. Load-to-truck ratios represent the number of loads posted for every truck available on DAT load boards. The load-to-truck ratio is a sensitive, real-time indicator of the balance between spot market demand and capacity. Changes in the ratio often signal impending changes in rates.
For complete national and regional reports on spot rates and demand, visit dat.com/Trendlines. DAT Trendlines is a weekly report on spot market freight availability, truck capacity, and rates.