Friopuerto Veracruz is designed to streamline the processes of imports of perishable goods through the Atlantic coast of Mexico and, in particular, from Spain. 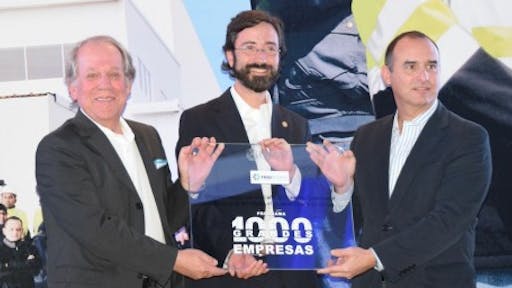 The opening ceremony was chaired by Ramón Gómez Barquín and Edgar López, respectively president and general manager of Group Inversor Veracruzano as well as by Francisco Romeu Loperena, president of Friopuerto and the Romeu Group.

The city of Veracruz hosted the official opening gala of Friopuerto’s new facility in Mexico, Friopuerto Veracruz. The event was attended by various local authorities, including:

The opening ceremony was chaired by Ramón Gómez Barquín and Edgar López, respectively president and general manager of Group Inversor Veracruzano as well as by Francisco Romeu Loperena, president of Friopuerto and the Romeu Group.

With an investment of 96 million Mexican pesos, the first phase facility has 2,500 square meters and 15.196 cubic meters. Divided into two cold-storage chambers for chilled product and one bitemperature cold-storage chamber for both chilled and frozen products, the cold store has a total of 3,000 pallet positions. It also has seven loading docks and inspection areas for animal and vegetable origin products.

Friopuerto Veracruz is designed to streamline the processes of imports of perishable goods through the Atlantic coast of Mexico and, in particular, from Spain. It will also try to grow in the export business, mainly to the U.S., where at present most of the traffic is done by truck.

The Veracruz cold store is Friopuerto’s first international project and has been constructed in joint venture with the Group Inversor Veracruzano, a powerful local partner formed exclusively by customs brokers operating at the Port of Veracruz.

Friopuerto begin construction of another cold store, in this case at the Port of Tangiers in Morocco, with starting operations planned for the first quarter of 2016. In addition to these two projects and the expansion currently underway at its Valencia Port facility, Friopuerto is studying other projects in the Iberian Peninsula, in the Maghreb and in Latin America.