Although the newly deepened port of Baltimore is one of just a handful that can accommodate giant ships moving through the newly widened Panama Canal, the Howard Street Tunnel bottleneck limits how quickly cargo can move through the port. 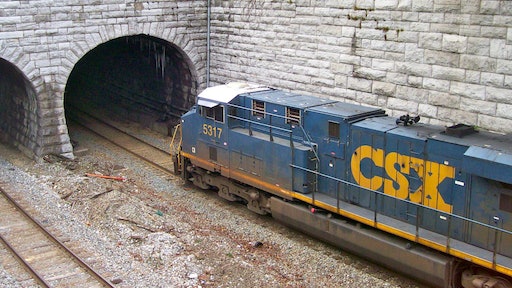 The tunnel, dug in the 1890s, was built to accommodate trains of that era. It does not have enough clearance to allow the passage of double-stacked freight containers, so cargo coming out of the port moves at half the pace that it can leave other facilities.

Maryland governor Larry Hogan proposed this week to find a way to expand the more than century-old Howard Street Tunnel underneath Baltimore, a "transformative" project he said could spur an almost limitless production increase at the Port of Baltimore.

Although the newly deepened port of Baltimore is one of just a handful that can accommodate giant ships moving through the newly widened Panama Canal, the Howard Street Tunnel bottleneck limits how quickly cargo can move through the port.

The tunnel, dug in the 1890s, was built to accommodate trains of that era. It does not have enough clearance to allow the passage of double-stacked freight containers, so cargo coming out of the port moves at half the pace that it can leave other facilities. If the tunnel were expanded, 178,000 containers that now leave the port on tractor-trailers each year could be moved by rail.

After touring what he called the "infamous" tunnel that bottlenecks freight coming out of the port of Baltimore, Hogan predicted the federal government would help pay the $425 million price tag to make it deeper.

"This is something that we're going to make sure gets done," Hogan told reporters at the Seagirt Marine Terminal. "It's critically important, not only to the port of Baltimore and the city of Baltimore, but the entire state of Maryland. It really could be transformative to our economy."

Hogan emphasized the state's plans to reapply for $155 million in federal FASTLANE funding, a new federal grant program that last year doled out $800 million to 18 projects. Neither of Maryland's applications received any money last year. Rail giant CSX Corp., which owns the tunnel and the track, and Maryland transportation officials pitched this plan to the federal government earlier this year. The state promised to cover $145 million of the project and CSX would pay for $125 million. They are hoping the federal government will cover the remaining $155 million.

MTC Logistics Expands at the Port of Baltimore