With Thanksgiving occurring late in November, the holiday weekend coincided with end-of-month pressures. 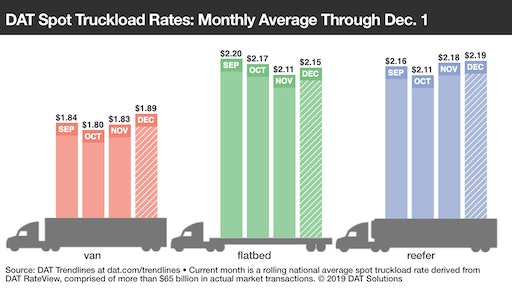 With Thanksgiving occurring late in November, the holiday weekend coincided with end-of-month pressures. Spot truckload rates rose sharply on loads that were picked up during the week ending Dec. 1 as brokers tried to attract capacity during the short workweek, said DAT Solutions, which operates the industry’s largest electronic marketplace for truckload freight. The number of loads moved declined and load-to-truck ratios fell for all three equipment types.

Reefer load-posting activity started last week strong and tapered off toward Thanksgiving Day. Unlike van posts, reefer load posting activity increased on Friday as goods move through the cold chain to restock grocery stores and distribution centers for the holidays ahead.

Average outbound rates increased in most major reefer markets but two lanes stood out compared to the previous week: