The CNG conversion comes as the 2014 football season kicks off one of the company’s busiest shipping periods of the year – with 17 million cases of beer shipped by the Houston fleet during third quarter. 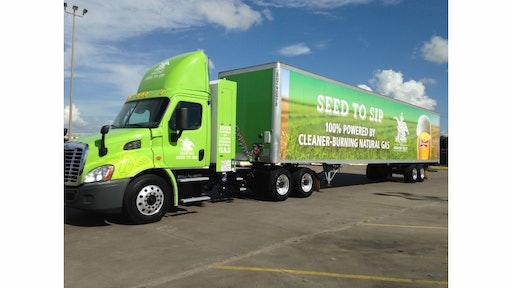 Ryder System, Inc., a provider of commercial fleet and supply chain solutions, announced it is partnering with Anheuser-Busch to replace the beer company’s 66 diesel tractor fleet in Houston with Compressed Natural Gas (CNG) powered engines. This marks Anheuser-Busch’s first conversion of an entire fleet and represents a significant milestone in demonstrating the company’s commitment to reducing environmental impact in logistics.

“The next generation CNG engine technology paired with support from state incentive programs contributed to our ability to take such a significant step in fully converting our Houston fleet,” said James Sembrot, senior director, transportation, Anheuser-Busch. “Houston is a strategic choice due to the central location to our facilities and distribution radius, as well as its proximity to fueling stations.”

The CNG conversion comes as the 2014 football season kicks off one of the company’s busiest shipping periods of the year – with 17 million cases of beer shipped by the Houston fleet during third quarter. Through the advanced engine technology, the fleet is expected to reduce 2,000-tons of carbon dioxide (CO2) emissions per year when adjusting emissions reduction for consumption rates.

"The city of Houston was an early leader in the pursuit of cleaner, greener energy options,” said Mayor Parker. “It is encouraging to see one of our major companies taking a major step forward in this area. Cleaner technologies benefit all Houstonians because they help improve the air we breathe."

Anheuser-Busch is one of only a few large, heavy-haul shippers to complete a full fleet conversion to alternative fuel power vehicles. In June, the company added an environmental goal to reduce carbon emissions in its logistics operations from network planning, transportation, and warehousing by 15 percent by the end of 2017.

The CNG conversion represents significant business and environmental benefits for Anheuser-Busch. Working with transportation partner, Ryder, the 12-liter lighter-weight engines are expected to emit 23 percent less greenhouse gases (compared to diesel), which is the equivalent of taking approximately 420 passenger vehicles off the road.

“We commend the Anheuser-Busch team for their leadership and decision to convert their entire Houston brewery fleet to cleaner, more efficient natural gas,” said Dennis Cooke, president, Global Fleet Management Solutions for Ryder.  “We are honored that Anheuser-Busch has trusted Ryder as its leasing and maintenance partner to help take this important step toward reducing the environmental impact of their fleet.”

Once fully installed, the company estimates it will secure significant savings.

The natural gas vehicles are being made available through Ryder’s participation in the Texas Natural Gas Vehicle Grant Program, funded by the Texas Emissions Reduction Plan initiatives and administered by the Texas Commission on Environmental Quality. As part of the lease agreement, Ryder will maintain the vehicles out of its Houston service facility. This is Ryder’s first project with Anheuser-Busch and Ryder’s largest natural gas vehicle deployment to date.

Are you Ready for the New Regulatory Landscape for Global Food Supply Chains?