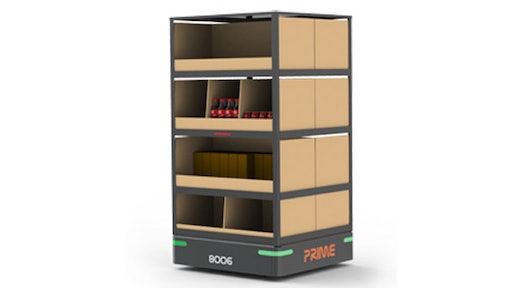 Prime Robotics launched the Auto Shelf, a revolutionary warehouse robotics platform that overcomes the inherent compromises of other autonomous mobile robotics (AMR) systems with a fully patented design that integrates the robot into every shelf.

While goods-to-person AMRs require less human travel than manual order picking because the worker stays in one place while robots bring inventory, most AMR systems are constrained by the number of robots they have to transport dumb shelves. Auto Shelf system eliminates the wasted time of robots traveling, carrying, lifting and dropping; when a shelf is needed, the shelf drives itself to the destination.

“The Auto Shelf turns the warehouse robotics paradigm on its head by making every shelf a robot that has intelligence.” says Eric Rongley, founder and CEO of Prime Robotics. “Since every shelf can move and interact directly with workers, there’s never any wasted time waiting for the next shelf.

“While the first version of the Auto Shelf will be highly productive, the revolutionary design provides a platform that can be extended and take on capabilities no other warehouse robotics system can accomplish,” adds Rongley. Each Auto Shelf features lights directly integrated into shelf slots to provide pick-to-light functionality.  The Auto Shelf Dispatch System adds another layer of intelligence by optimizing item/shelf locations, reducing the movements the robots need to perform and shortening the distance on the fastest moving items.

“The Auto Shelf will change how inventory is handled,” says Rongley.  “Prime Robotics has created a new robotics platform and patented all aspects of warehouse and other use cases. Large customers can deploy the system with confidence that not only do they have the most efficient warehouse robot system, but that the intellectual property of the robot is clean.”