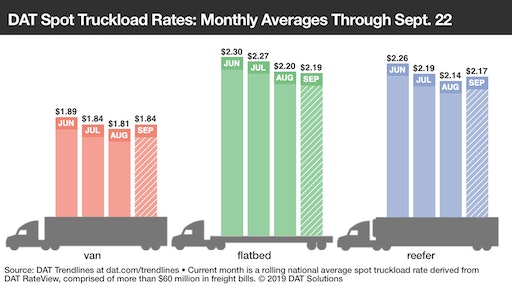 The price of diesel, meanwhile, shot up 9 cents to $3.08 per gallon as a national average.

The van load-to-truck ratio averaged 2.1, down from 2.4 the previous week. Spot van rates were higher on 41 of DAT’s Top 100 largest van lanes by volume, with few notable price swings.

Where rates were up: Denver increased 6 cents to an average of $1.24 per mile. Rates were higher from Denver to Houston ($1.30 per mile, up 12 cents) and other markets like Oklahoma City that generally use Houston-based businesses in their supply chains. Suppliers in Denver helped pick up the slack.

The effects of Hurricane Dorian continue to fade, with demand for trucks falling in the Southeast:

Where rates were up: Tree-fruit harvests continue to generate volume in the Upper Midwest. Grand Rapids, Michigan, to Madison, Wisconsin, rose 26 cents to an average of $3.07 per mile last week. The return trip paid $3.55 per mile—that’s an average of $3.31 per mile for the 662-mile roundtrip between the two markets.