Access to the country's main poultry exporting port of Itajai in Santa Catarina has been blocked since Friday, affecting meat packers BRF SA and JBS SA, a port spokesman said. 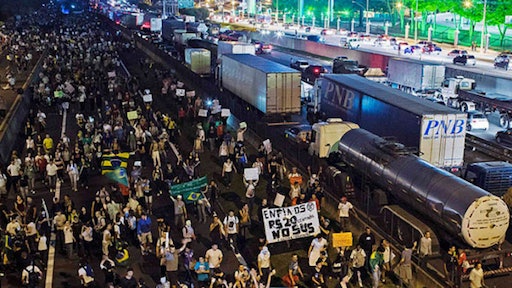 Striking truck drivers resumed some roadblocks in Brazil on Monday, disrupting grain and meat shipments to southern ports even as the government cracked down on protesters and promised to give new benefits to the transport sector, according to The Maritime Executive.

By mid-afternoon there were 23 road blockages in three southern states, down from 99 points nationwide a week ago, the federal highway police said.

Access to the country's main poultry exporting port of Itajai in Santa Catarina has been blocked since Friday, affecting meat packers BRF SA and JBS SA, a port spokesman said.

A BRF spokeswoman said the company had reopened all the plants it had to close as a result of the strike and animal feed was being transported to farms.

The country's No. 3 soy exporting port of Rio Grande, in Brazil's southernmost state of Rio Grande do Sul, said 70 percent of its operations were affected.

The nearly two-week-old movement has slowed grain deliveries, delayed soybean harvesting due to lack of diesel fuel and forced meat-processing plants to close.