Automating your existing warehouse facility is the only solution that offers flexibility, scalability, and adaptability to your current space. It is a long-term fix, yielding a short-term ROI and a sustainable business value. 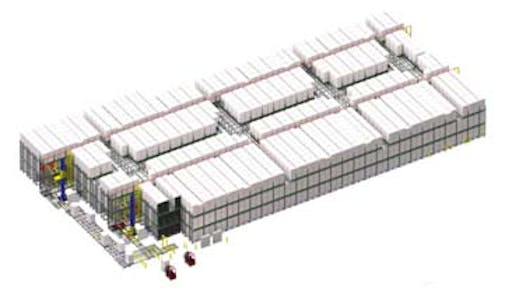 The middle market sector stands somewhere between Wall Street and Main Street. The National Center for the Middle Market estimates that if the midmarket were a country, its GDP would be fourth largest in the world. It is a facet of the economy that remains strong even in the face of recession, with revenue and employment growth that continually outpaces both startups and enterprises.

For mid-market companies reliant on inventory-driven revenue, the warehouse feels the brunt of business growth. Greater demand means more product, but where to put it? Here, a warehouse manager has four options: build a new warehouse facility, build an expansion on the existing facility, purchase external storage, or automate the existing warehouse.

Building a new facility or an expansion involves a significant investment in both time and money. Dividing existing storage into onsite and offsite facilities is also a considerable waste of resources.

Automating your existing warehouse facility is the only solution that offers flexibility, scalability, and adaptability to your current space. It is a long-term fix, yielding a short-term ROI and a sustainable business value.

Picture a warehouse where vertical lifts work simultaneously with robotic vehicles to manage palletized loads without a forklift. Imagine this system working independently, yet harmoniously, to intelligently store and retrieve product on demand. The warehouse operates on a lights out model: storage and retrieval are optimized for growth, inventory damage is minimized, accuracy is maximized, and productivity skyrockets.

Imagine an automation solution that provides optimum density, the highest throughput, and ultimate reliability. Now imagine that warehouse is yours.

So Why Aren’t You Automating?

The initial capital investment, as well as the new technology associated with automation, often dissuades upper management from viewing automation as a legitimate solution. But automation yields sizeable ROI within 2 years, and automation is built as a permanent solution where ROI will scale alongside business growth. As for the age of automation technology, General Motors received a few side glances from competitors when it opened up its automation department in 1947; the 1950s are now largely perceived as a turning point in American automobile manufacturing.

The technology isn’t new. It’s merely been redesigned for the warehouse. And now, thanks to Power Automation Systems, it’s available to the midmarket.

The PowerStor 4000 was built for companies with medium-to-small storage needs. This adaptive, fully automated system can retrofit to existing space to maximize density and efficiency in your current warehouse.

Many companies struggle with increasing capacity — out of storage space and landlocked, unable to expand. By implementing PowerStor 4000, you can double your storage capacity within the same footprint, simultaneously obtain absolute inventory control and minimize product damage, and achieve the highest throughput and density in your industry.

Your existing space can be optimized to grow with your business. Your warehouse deserves automation. Contact us today at (209) 249-1616, and learn more about what Power Automation Systems can do for your warehouse.