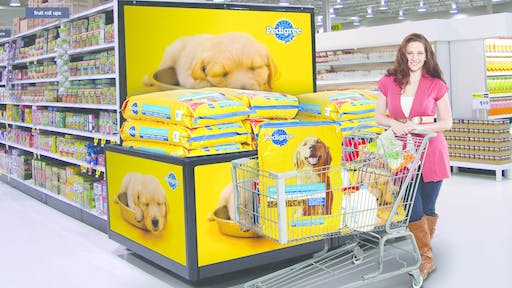 ADS Box is Eco-Friendly and Doubles as a Billboard

Retail Handling Solutions’ ADS Box is an eco-friendly way to display palletized product in the retail store, is convenient for consumers, and doubles as a billboard. The ADS Box is a floor mounted, fully portable, four-sided in-store display box that continuously repositions the remaining goods on a pallet at the convenient height of a shopping cart as the displayed products are removed by consumers. In addition to keeping products at the optimal height for shoppers, the ADS Box also provides retailers with four-sided customizable “billboard” that can be used to further promote its contents, says the company. The box is easily moved by pallet truck inside a store and can accommodate a range of pallet sized and styles up to 40” x 48”. It’s also reusable and recyclable.

On June 13, the U.S. Supreme Court further weakened the clean trucks program at the Port of Los Angeles, ruling that two concessions--one requiring harbor trucks to display placards will in service at the port, and another requiring trucking companies to develop off-street parking plans for their vehicles--was in violation of federal law.

Previously, the U.S. Court of Appeals for the 9th Circuit had struck down a concession requiring harbor trucking companies to hire drivers as direct employees.

Phillip Sanfield, a spokesman for the Port of Los Angeles, defended the clean truck program, which he said has taken over 1,500 older trucks out of operation and reduced diesel truck pollution at the port by approxi­mately 90 percent since its implementation.

“We are reviewing the Supreme Court’s decision, but we intend to continue our efforts to clean LA’s port to the extent the law allows,” remarked Sanfield.

The Nigerian government is aggressively going after perishable air cargo as a way to bolster that country’s aviation sector revenues.

Last month, 13 air cargo centers with stra­tegic locations near Nigeria’s “food baskets” areas were named as those which would be developed to meet international standards for handling perishables.

Exports of fruits, fresh fish, vegetables and flowers are big business for many African countries, such as Kenya, South Africa and Tanzania, yet Nigeria, which produces many of these same commodities “records zero par­ticipation,” explained a Nigerian government official, who added that the European Union is Africa’s largest export market for these commodities, accounting for more than 40 percent of total exports, followed by the U.S. with 20 percent.

Intra-regional trade represents only 8 percent of the total, with South Africa as the leading exporter to the region.

Great Dane has delivered the first reefer trailer out a 200-unit order for Celadon. The reefer trailers are being manufactured at Great Dane’s newest manufacturing facility in Statesboro, GA and will feature Great Dane’s ThermoGuard reefer liner, which helps to minimize thermal degradation of the trailer’s insulation over time.

“As a long-time supplier of Celadon’s dry freight trailers, we’re especially honored that Celadon selected us for its initial order of refrigerated trailers,” said Dave Gilliland, Great Dane’s vice president of national accounts. “These trailers will enable Celadon to expand its customer service by hauling temperature-controlled freight in addition to its already wide range of services. We’re confi­dent that these new trailers will prove to be a sound investment for Celadon.”

The deal expands on one already in place between C&S Wholesale Grocers and BI-LO Holding since 2005.

New Hampshire-based C&S Wholesale Grocer is the largest food wholesaler in the U.S., serving about 4,000 stores from more than 50 locations in 12 states.

Illinois-based KeHE Distributors, which specializes in natural, organic and specialty foods, is expanding its network to keep pace with growing volumes of fresh and frozen food products.

The company’s DC in Dallas is doubling the size of its freezer and cooler space, while a facility in Fort Lauderdale, FL will boost its frozen capacity by four times and double its cooler space. KeHE’s distribution center in Romeoville, IL will add 30 percent to its existing non-ambient space to accommodate more bulk food products.

KeHE distributes to more than 33,000 retail outlets throughout North America.

The new reefers were positioned at the Blount Island Terminal in Jacksonville, FL. They are outfitted with Carrier PrimeLine Machinery, one of the most advanced technologies for refrigerated equipment.

The existing hub, located 16 miles from the Minnesota border and close to three interstates and a Union Pacific Railroad interchange, will be expanded to handle more outbound farm products with a new food-grade warehouse with refrigerated rail cars and 20 acres for stuffing containers.

Once the expanded facility opens in 2014, it will offer rail shippers in Iowa and Min­nesota more affordable transportation options and better access to both domestic and inter­national markets.

Chicago’s O’Hare Airport got the green light to build a $2 million perishables center to help it capture growing business in fresh and frozen food, pharmaceuticals and flowers.

Chicagoland Chamber of Commerce retiring president Jerry Roper has been lead­ing the fight for the new center, called “The Orchard,” in reference to Orcharld Field, as O’Hare used to be called.

“We leap to the front of the line because of our geography--because we can fly around the world from O’Hare with 62 non-stops from O’Hare. So, we’ve got a chance to really take this market and run with it,” said Roper, who said the current scenario of air freighting fresh flowers from Ecuador to Miami and then trucking them to Chicago didn’t make sense.

“We went down to Ecuador and spoke with the growers [and asked] if we position Chicago as a perishable center and interna­tional hub, would they consider our market­place and it was overwhelming,” he said.

The Orchard perishable center will be located in a 27,000 square-foot facility just east of O’Hare’s international terminal. It will include cooler space, on-site fumigation, and offices for customs and other government agency officers and air cargo personnel.

Volvo’s Bio-DME Trucks to Hit US Highways in 2015

Volvo Trucks plans to begin limited pro­duction of dimethyl ether (DME) powered heavy-duty commercial vehicles starting in 2015. Like diesel, DME offers good perfor­mance and energy efficiency, but burns clean without emitting any soot. It can be made from a variety of sustainable domestic sourc­es, including North America’s ample natural gas reserves, says Volvo.

“We believe the fuel shows great potential for the North American market, and when produced from biomass, it can provide a 95 percent reduction in CO2 compared to die­sel,” said Goran Nyberg, president of Volvo Trucks North American Sales and Marketing.

Volvo’s Bio-DME Trucks to Hit US Highways in 2015

Volvo Trucks plans to begin limited pro­duction of dimethyl ether (DME) powered heavy-duty commercial vehicles starting in 2015. Like diesel, DME offers good perfor­mance and energy efficiency, but burns clean without emitting any soot. It can be made from a variety of sustainable domestic sourc­es, including North America’s ample natural gas reserves, says Volvo.

“We believe the fuel shows great potential for the North American market, and when produced from biomass, it can provide a 95 percent reduction in CO2 compared to die­sel,” said Goran Nyberg, president of Volvo Trucks North American Sales and Marketing.