An estimated 461 million Chinese consumers, a third of the population, are now shopping online, up from 46 million in 2007, when e-commerce started gaining momentum. 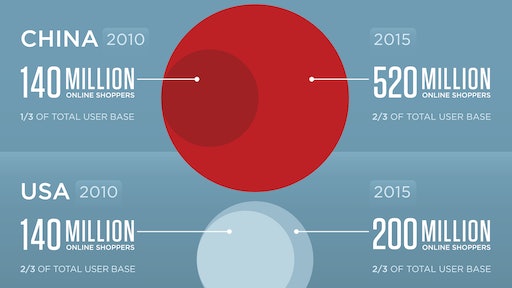 Unilever  blamed a slowing Chinese economy and a pullback by shoppers. But a close look at retailing trends in China suggests Unilever was also feeling the pain of the migration of hundreds of millions of Chinese consumers to online shopping, according to Marketwatch.

Unilever wasn’t the only Western company overestimating brick-and-mortar. Swiss food giant Nestlé SA  has been burning instant coffee it couldn’t sell in stores. It recently told The Wall Street Journal it failed to fathom the extent of how quickly and broadly retail was changing in China.

Wal-Mart Stores Inc.,  which entered China in 1996, no longer aims to be China’s largest retailer and it says it needs to work on its online strategy. Its store traffic in China has fallen steadily over the past three years.

Consumer-goods companies in China in general were “too slow to react to the changes in the marketplace,” Jean-Marc Huët, Unilever’s chief financial officer, said in an April interview. He declined to weigh in on whether Unilever had been later than its rivals to spot trends.

The exodus from stores has disrupted retailers world-wide, with global e-commerce topping $1.3 trillion last year. But in China, the move online happened with greater force, partly because of the speed of smartphone penetration.

An estimated 461 million Chinese consumers, a third of the population, are now shopping online, up from 46 million in 2007, when e-commerce started gaining momentum. China’s e-commerce market grew 49 percent last year—after gains in the prior three years of 59 percent, 51 percent, and 70 percent, respectively. In 2013, China overtook the U.S. as the world’s biggest e-commerce market, and last year the country rang up $453 billion in sales online, 11 percent of all retail sales.

The shift is reverberating across China. Malls such as Beijing’s Zhongguancun electronics market, once packed with hawkers and buyers, have emptied out. Some analysts warn about related labor shortages, blaming “Taobao villages,” where residents who in the past would have gone to cities to fill low-skill jobs are staying home to run stores on Alibaba Group Holding’s Taobao marketplace or to handle deliveries. Alibaba, meanwhile, aims to offer next-day delivery in 50 cities by the end of this year.

Nestle To Remove Artificial Flavors From Pizza And Food Snacks