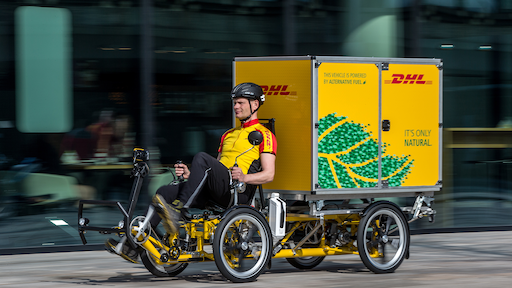 The City Hub is a customized trailer that can carry up to four containers for the DHL Cubicycle, a customized cargo bicycle, which can carry a container with a load of up to 125 kg.

The City Hub is a customized trailer that can carry up to four containers for the DHL Cubicycle, a customized cargo bicycle, which can carry a container with a load of up to 125 kg (one cubic meter in volume). A DHL van delivers the trailer into the city center, where the containers can quickly be loaded on to two Cubicyles for last-mile inner-city delivery. It can then be reloaded for outbound shipments.

DHL has launched two pilots of the City Hub concept— one in Frankfurt, Germany’s fifth largest city, and another in Utrecht in the Netherlands, which recently announced the target of becoming climate-neutral by 2030.

“DHL Express has already replaced up to 60 percent of inner-city vehicle routes in some European countries with cargo bicycles, and we expect that the City Hub and Cubicycle will both help us to accelerate this approach in other markets over the next 3-5 years,” says John Pearson, CEO, DHL Express Europe. “Bicycles offer a number of advantages in express delivery operations. They can bypass traffic congestion and make up to two times as many stops per hour than a delivery vehicle. The total cost of ownership over their lifetime is less than half of a van. And crucially, they generate zero emissions, which reinforces our own ongoing program to minimize our environmental footprint, and supports city governments’ efforts to promote sustainable city living.”

Thanks to its use of standardized containers, which match the dimensions of a standard shipping pallet and can be transferred more easily and quickly between the different modes of transport within the DHL Express network, the City Hub concept will bring additional speed and reliability to DHL’s last-mile delivery operations for documents and small packages. The Cubicycle, which was developed in the Netherlands and introduced to the DHL network in 2015, boasts a number of features that make it ideal for express delivery operations, including a reclining seat for the courier that allows for greater comfort, safety and speed. It boasts electric pedal assistance for additional speed and support in climbing hills, and it is easy to handle, with a tight turning cycle.

The removable containers are secure and waterproof, and offer a large volume while not impairing the view of other cyclists. They can be equipped with GPS or Internet of Things (IoT) transmitters to facilitate real-time shipment tracking and to ensure they can be monitored for security purposes, and they are self-powered through the use of solar panels.

DHL Express has introduced bicycles in more than 80 European cities in 13 European countries to date, including 14 Cubicycles in seven cities. Cubicycle couriers cover on average 50 kilometers per day.

Study Says the U.S. Meat Supply Chain Has Collapsed Due to the Coronavirus Pandemic

How to Manage Supply Chain Sustainability During COVID-19

Gotham Greens’ eighth greenhouse and will deliver a year-round supply of fresh, long-lasting produce to retail, restaurant and foodservice customers across 7 states within the Mountain Region.
Gotham Greens
May 20, 2020

Imperial’s Chemical logistics division has been awarded the contract to store and handle lithium-ion traction batteries for the German operations of a major global automotive manufacturer.
Imperial Logistics International
May 18, 2020

COVID-19 is a wake-up call that the status quo is unsustainable, and that innovation is crucial to making sure food supply chains are not crippled in the future by more serious and perfectly predictable disruptions.
Perch Perspectives
May 18, 2020

Marina, Brielle and Mackenna sit down with special guest Abe Eshkenazi, CEO of The Association for Supply Chain Management to discuss whether or not the supply chain is breaking.
May 13, 2020

Study: COVID-19 Inhibits Demand for Processed Meat Amid Bottlenecks in Supply and Production

The market is anticipated to re-gain traction post-pandemic with safety guidelines instituted at facilities.
May 13, 2020

The COVID-19 pandemic suggests the local food economy is nimble and ready to respond to consumers’ desire to feel more food secure, connected and supportive of their farms and food producers.
Dawn Thilmany
Trey Malone
May 11, 2020

Even before the current COVID-19 situation, deployment and commercialization of fully electric technologies in the largest commercial vehicle segments was projected to be several years out.
Diesel Technology Forum
May 11, 2020

This latest initiative will enable local farmers to sell their fresh produce through a large network of distribution and collection centers.
Carrefour
May 7, 2020

How to Select the Right Solar Panel for Your Fleet

Solar power is no longer a technology meant only for the roof of a home or in a field.
Thermo King Corporation
May 6, 2020

Study: Maximum Trust and Transparency are Important During COVID-19 Pandemic

The implications of COVID-19 are wide ranging, with 48% of consumers believing that it is something that will impact day-to-day behavior for at least 12 months.
FMCG Gurus
May 6, 2020

HelloFresh to Offset 100% of Its Carbon Emissions

HelloFresh partnered with terrapass to balance its carbon emissions, starting with the 2020 calendar year.
HelloFresh
April 28, 2020

The program will provide a platform to coordinate various sources of funding and streamline the incentive application process for retailers.
The North American Sustainable Refrigeration Council (NASRC)
April 28, 2020

General Mills set a goal to source 100 percent renewable electricity by 2030 as part of the RE100 global corporate initiative.
General Mills
April 27, 2020

Perch Perspectives delivers a holistic worldview that businesses and decision-makers can use to influence their own circumstances instead of react to them.
Perch Perspectives
April 24, 2020