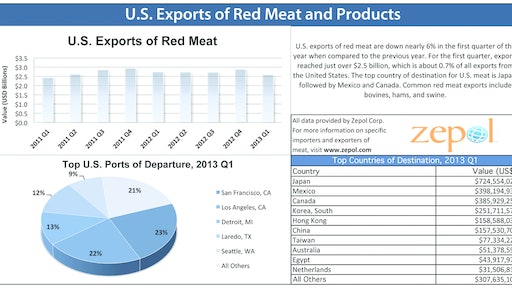 Bee Decline Linked To Pesticide Use

A class of pesticides called neonicotinoids have been linked to a decline in bees, butterflies and other pollinators. These pesticides were developed to be less harmful to beneficial insects and mammals, but have impacted the ecosystem, resulting in what scientists call Colony Collapse Disorder.

Neonicotinoids have been used since the late 1990’s in crop seeds. The pesticide binds to receptors in an insect’s nervous system killing them and keeping corn and soya bean crops safe. Unfortunately, it appears that collateral damage has occurred in bees and other pollinators who have come in contact with the plants.

European food safety regulators determined that the use of clothianidin, imidacloprid and thiamethoxam—the three most common neonicotinoids—should be minimized for use in certain crops. It was followed by a proposed two-year ban on these chemicals by the European Union.

Meanwhile, UK grocery chain Waitrose is taking action to avoid stocking shelves with products that have used these pesticides. Recently, bloggers, foodies, and software developers gathered in San Francisco for the Food Hackathon to discuss the future of food technology. The event’s creator, Matt Wise, said the goal is “to harness intellectual and creative capital to focus on innovative ways to solve problems that affect the entire food ecosystem.”

The winner from this year’s event was an iPhone app called Vibrantly. The app helps a user make positive food choices according to a food’s color. Color is important, according to the developer, because studies indicate that it “stimulate[s] your right brain” and will motivate a positive behavioral change. Food color is also linked to nutritional quality and this helps the user make wiser, more health-conscious decisions. The link between food and technology is growing with $350 million invested in related fields during 2012.

Recently, bloggers, foodies, and software developers gathered in San Francisco for the Food Hackathon to discuss the future of food technology. The event’s creator, Matt Wise, said the goal is “to harness intellectual and creative capital to focus on innovative ways to solve problems that affect the entire food ecosystem.”

The winner from this year’s event was an iPhone app called Vibrantly. The app helps a user make positive food choices according to a food’s color. Color is important, according to the developer, because studies indicate that it “stimulate[s] your right brain” and will motivate a positive behavioral change. Food color is also linked to nutritional quality and this helps the user make wiser, more health-conscious decisions. The link between food and technology is growing with $350 million invested in related fields during 2012.

Investors are excited about fields that have a sustainable or environmental appeal, while others are attracted to the health and fitness angle. Still others see food start-ups as good places to grow technology and advertising related investments.

“There are pretty significant environmental consequences?and health issues associated with sodium or high-fructose corn syrup or eating too much red-meat,” explained Samir Kaul, a partner at Khosla Venture, to the New York Times. “I wouldn’t bet my money that Cargill or ConAgra are going to innovate here. I think it’s going to take start-ups to do that.”

Iowa State University recently conducted a study on ‘pink slime’ in hopes of shedding light on the controversial beef additive. However, Judge Dale Ruigh from Iowa City, Iowa, decided to block the university from releasing the results of the study claiming that the report could cause “irreparable harm” to the beef company and would “damage Beef Products Inc. by revealing information about its proprietary food-processing techniques.”

Although this additive is considered by the meat industry to be safe for consumption, public concern has grown considerably.

GAP Questions the Safety of Chemicals in Poultry Plants

Federal inspectors have agreed to team up with whistleblowers to examine the health implications related to chemical exposure for employees in these types of plants. Already, the Government Accountability Project has published two affidavits where FDA inspectors have stated there is “great concern over chemical use.”

Indeed, many of the affidavits collected over two years’ time were particularly worrisome. Some of the problems identified included leaving contaminated carcasses on the line with other birds; while employees suffering serious health problems, such as breathing problems, were unable to receive treatment.

For their part, inspectors claim their concerns and safety reports continue to be ignored or ineffectively addressed.

Many companies, meanwhile, have allegedly ignored physician’s warnings that the chemicals used during poultry processing could negatively affect employees’ health.

In one case, a company’s response to poor ventilation was to install overhead fans, which simply circulated airborne chemicals rather than expelling them.

In the UK, 30 percent of crops were not harvested due to their failure to meet retailers’ exacting standards on physical appearance, while up to half the food that is bought in Europe and the U.S. is thrown away by consumers.

The San Francisco Federal Court is hearing a case that claims lax federal regulators allowed arsenic-based additives in chicken and pig feed. Eight groups, including the Center for Food Safety, are suing the federal Department of Health and Human Services, claiming that arsenic has the potential to case cancer in humans and needs to be immediately removed from all animal feed.

In the 1940’s, arsenic was approved for use in animal feed. And “more than 70 years later, arsenic-containing feed additives— namely Roxarsone, arsanilic acid, nitarsone, and carborsone—are still used in chicken, turkey and swine production,” states the complain- ant.

In 2004 and 2005, the plaintiff tested retail products made from raw chicken and chicken used in fast food chains. The results found that chickens, which were fed food with no arsenic, had no detectible arsenic levels in the food. Chicken that had consumed feed with arsenic did have testable levels of arsenic.

According to the plaintiff, “These results strongly suggest that the use of arsenic-containing compounds in poultry feed leads to arsenic residues in chicken market- ed and eaten in the United States.”

Most important is the defendants’ claim that the FDA failed to act on their request to revoke arsenic-containing feed.

Germany is raising awareness and reducing food waste by educating their citizens about how to properly use the ‘best-by’ dates on food as guidelines.

The Agriculture and Consumer Protection Ministry will distribute pamphlets throughout supermarkets as a way to alert the general population that expiration dates are not exact dates in which to trash food. The pamphlets will also inform German citizens that they each waste 181 pounds of food a year. The pamphlets will be circulated in 21,000 markets.

The Risks With Raw Milk

A single vote this month kept?a ban on raw milk illegal in Montana. House Bill 574 would have shifted liability should anyone become ill from ingesting contaminated raw milk, from the producer to the consumer.

In Pennsylvania there had been an outbreak of campylobacter that sickened 148 individuals after ingesting raw milk, which was published in Clinical Infectious Disease in January 2012. This dairy had a permit to sell unpasteurized milk. They had passed inspections and were diligent in testing for E. coli. Even with these protections in place there still exists a danger of consuming unpasteurized dairy.

Chinese authorities in Shanghai and Jiangsu have wrapped up a three month long investigation and detained 63 individuals who were implicated in a criminal ring selling fox, rat and mink meat to restaurants as lamb.

Reportedly they made more than $1.6 million dollars (10 million yuan) selling this meat to unsuspecting markets and restaurateurs. The men had to treat the meat with additives and chemicals to mask its animal original origin.

This incident comes right on the heels of a number of safety violations recently making news in China. In December Yum! Brands Inc. was accused of feeding mass amounts of antibiotics and growth hormones to their chickens. In March thousands of dead pigs and chickens were pulled from the Huangpu River.