The CDC update of 457 ill persons with confirmed Cyclospora infection from 29 states is 73 more people and two additional states since the previous CDC update one week ago. 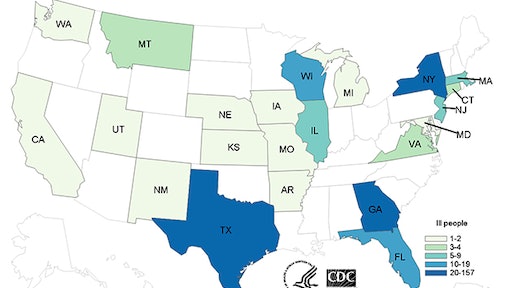 Reported U.S. cases of laboratory-confirmed, domestically acquired cyclosporiasis in persons with onset of illness since May 1, 2015.

According to the latest update posted Aug. 10, the U.S. Centers for Disease Control and Prevention (CDC) had been notified of 457 ill persons with confirmed Cyclospora infection from 29 states so far this year. That’s 73 more people and two additional states since the previous CDC update one week ago. Most of these people (275, or 60 percent of the total) experienced onset of illness on or after May 1, 2015, and did not have a history of international travel within 2 weeks before illness onset, CDC reported, according to Food Safety News.