Swiss Re's analysis of publicly-available food recall data in the U.S. shows that since 2002, the number of food recalls have nearly doubled with the increase influenced by regulatory changes and an increasingly globalized food supply chain. 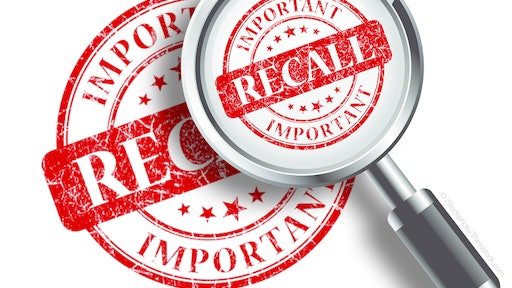 Food manufacturers operate in a vast, globalized supply chain, where one mislabeled product or contaminated ingredient can cause sickness, death, multi-million dollar losses and massive reputational damage for the affected companies, according to The Financial. Swiss Re's Food Safety in a Globalized World examines how the increasing number food recalls is impacting consumers public health services, governments and companies globally. The report describes how risk mitigation and risk transfer through insurance can protect food manufacturers operating in a highly globalized, often fragmented, supply chain.

Swiss Re's analysis of publicly-available food recall data in the U.S. shows that since 2002, the number of food recalls have nearly doubled. The increase has been influenced by regulatory changes and an increasingly globalized food supply chain.

"In a more globalised economy, ensuring the highest level of food safety is becoming an ever greater challenge for firms," says Jayne Plunkett, head of casualty reinsurance at Swiss Re. "Today ingredients and technologies are sourced worldwide. This leads to greater complexity for food manufacturers and consumer and regulatory demands on companies are continually increasing."

A single food recall can lead to severe financial loss and reputational damage for food producers. 52 percent of all food recalls cost the affected US companies more than $10 million each and losses of more than $100 million are possible. This figure excludes the reputational damage that may take a company years to recover from, according to Swiss Re.

The public sector is also heavily affected by contaminated food. According to the U.S. Department of Agriculture, costs for the U.S. public health system from hospitalized patients and lost wages in 2013 alone was $15.6 billion. In total 8.9 million people fell ill from the 15 pathogens tracked, with over 50,000 hospitalized and 2,377 fatalities.

Globally, the report finds that demographic change is also exposing more sensitive consumer groups to the dangers of contaminated food. Aging societies, an increase in allergies in the overall population and the fact that malnourishment as a source of weak body defenses is still prevalent in many countries are significant drives for the increase in exposure.