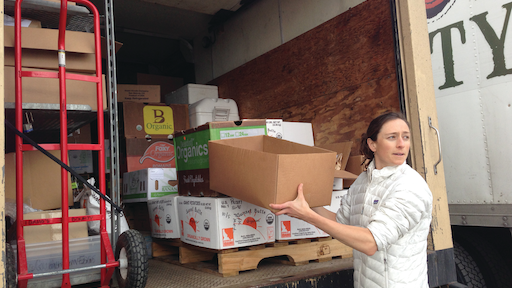 Local and regional “food hubs” that match locally-produced food with restaurants have been cropping up nationwide. Launched by the Wallace Center launched in 2008, the National Good Food Network is a peer-to-peer network of regional food systems practitioners, supporters and food hub developers. A food hub is a business or organization that actively manages the aggregation, distribution, and marketing of source-identified food products primarily from local and regional producers to strengthen their ability to satisfy wholesale, retail, and institutional demand. Food hubs leverage online ordering, tracking and marketing tools to cut down on costs and to try to keep local food systems viable for growers and affordable for consumers. For information, visit http://ngfn.org.

Walmart will test a new depot format where customers only pick up groceries they pre-ordered on Walmart’s website, according to news reports. Since last fall, the country’s largest retailer has been testing a drive-thru system for picking up online orders at 11 stores in the Denver area, but the planned project in Walmart’s Arkansas hometown of Bentonville will be a stand-alone depot that is not connected to a Walmart store. The idea was first announced by CEO Bill Simon earlier this year at an investors conference in Orlando, Fla.

Tesco is the clear winner in the online grocery market, taking almost 50p of every £1 spent on food shopping on the internet, according to Econsultancy. This virtual monopoly is set to continue not just because of spending on fulfilment, dark stores, distribution, stock and offline marketing, but due to its online visibility through organic search and a very visible well-structured website. Tesco is bucking the trend and hoovering up 50 percent of all online grocery spending. The online share of the grocery market is minuscule compared to other sectors within retail.

Publix Super Markets Inc., which serves six Southeast states, will roll out an online/mobile deli ordering system by summer, according to news reports. The company expects to offer it for all of its 1,077 stores by July. The system allows users to place deli orders 15 to 20 minutes ahead of pick-up using a computer, smartphone or tablet. It is accessible through the “deli selections” section of the Publix website.

Today’s ports and ocean carriers institute business continuity plans to keep product moving in and out of the United States amid the COVID-19 pandemic.
Marina Mayer
May 20, 2020
Latest

Finding safe and secure overnight parking is one of the most difficult tasks truckers face every day.
Trucker Tools
April 17, 2020

For growth-minded manufacturers, day-specific delivery is becoming the price of entry for landing and maintaining lucrative contracts with large retailers.
RLS Logistics
April 4, 2020

With both the rise of e-commerce and the increasing expectations of a consumer-like experience for B2B, 3PLs are experiencing pressure to evolve regardless of their customers.
3PL Central
February 17, 2020
Follow Us